Patriot’s Day Weekend had been going so well.  Old North had opened a colonial chocolate shop on Saturday to rave reviews and large crowds.  Our Annual Lantern Ceremony on Sunday was virtually flawless.  Dr. Jill Lepore’s keynote speech about Benjamin Franklin’s sister, Jane, who lived directly behind the church, was spot on.

Early Monday morning, I marched in a Patriot’s Day parade from City Hall, laying wreathes at the tombs of Paul Revere and William Dawes, before marching over to the statue of Paul Revere to bless the horse of a modern day re-enactor who then rode off to Lexington.  In hindsight my conversations with t local politicians seemed rather mundane.  We compared the race to elect a mayor with our own race to elect a new bishop.  We talked about coordinating school bus and tour bus parking in front of a new neighborhood elementary school to be established in what was formerly Mitt Romney’s headquarters.

After a couple of hours of construction planning at church, I walked home to take a nap, only to be summoned by a parishioner who was near the finish line when the bombs went off.  Shortly thereafter the National Park Service asked Old North to close down early as a security precaution, which we did.

Into the evening I was contacting family and friends to let them know our family was fine.  At the same time I was reaching out to other clergy in the Boston Harbor Deanery to offer prayers and support.  A priest from Trinity, Copley Square, adjacent to the finish line, assured me their church was fine as was the Trinity team of fundraising runners in the marathon.  One of our hospital chaplains reported on the stress in the emergency room of her hospital and the deep appreciation of all involved for the outpouring of prayer.

We opened the church as usual for tours on Tuesday and a greeting visitors who are more interested in prayer than in the story of Paul Revere.  As they enter, they will see a makeshift memorial and prayer for the victims of the tragedy. 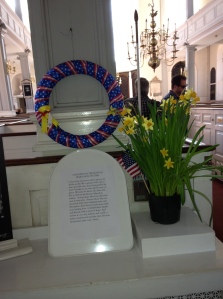 Meanwhile, outside the church, we are beginning to erect scaffolding so we can paint our steeple.  The steeple where two lanterns were courageously hung two hundred and thirty eight years ago.  The steeple that gave birth to Patriot’s Day and the tradition of the Boston Marathon.  Assaults on our freedom cut deeply here at Old North Church.  We will be keeping our lanterns lit and facing the Boston Marathon finish line to honor the innocent victims.

A PRAYER FOR THE BOSTON MARATHON VICTIMS

O Lord our Governor, whose glory is in all the world: We  commend this city to your merciful care, that, being guided by your Providence, we may dwell secure in peace. We pray for those who have lost life or limb in the Boston Marathon attacks.  Accept those who have died into your loving arms.  Protect those who are wounded with your compassionate care.  Strengthen their doctors and nurses with your healing love.  Comfort their family and friends with a sense of hope. And restore to our city, nation, and world, a sense of sanity and security, that all forms of terrorism may cease. Amen.